This section includes important and informative articles on real estate topics plus updates on new listings, sales, and list price changes. [Note: unless referenced, these articles are exclusively written by and copyright of Kelly Grant - REALTOR®️ at MaxWell POLARIS]:

Back in 2013, the City of Edmonton first announced the final stages of their proposed “On-street Bike Routes 2013”. These routes (and new ones being proposed) continue to the present. Ongoing feedback from Edmonton citizens to the City is being encouraged as a result of the implications these bike lanes will have not only to motorists but also on property owners along the proposed bike routes. To accommodate both debate viewpoints, this article presents both positives and negatives of increased cycling and bicycle routes, allowing readers to make an informed decision about which side of the issue they might support.

The route locations in Edmonton that will be impacted by the new bicycle routes are shown below (article reference: “On-Street Bike Routes 2013” brochure © 2013 by the City of Edmonton and for more information on design plans and parking / roadway changes visit www.edmonton.ca/cycling/ ). 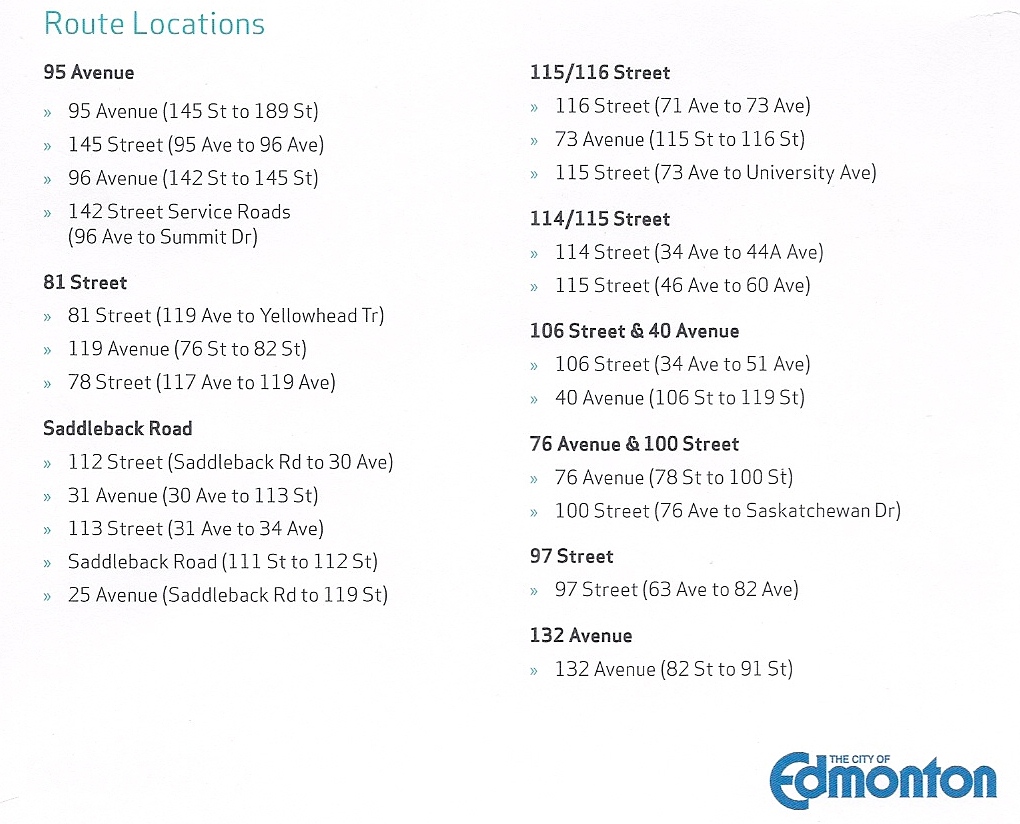 Firstly, below is a summary of Kelly Grant's perceived positives of increased cyclists and bicycle routes:

- More bicycles can reduce the volume of automobiles which translates to less roadway congestion.

- Bicycles (being pollution-free) help to reduce noise and protect the environment.

- Bicycle routes help to create a zone for bicycles that is safer than sharing the main roadway lanes with vehicles (but many would argue not as safe as moving bicycles competely off the road and onto the sidewalks).

- Cyclists who avoid getting injured, etc. in an accident over their lifetime can attribute health benefits from cycling.

Secondly, below is a summary of Kelly Grant's perceived negatives of increased cyclists and bicycle routes:

- Cycling on roadways (even with bike routes) is an inherently dangerous activity and every year many cyclists are injured or killed causing suffering to the cyclist and also to the cyclist's family and friends.

- Some inexperienced cyclists will exhibit erratic behaviour (e.g. swerving into a motorist’s lane). This combined with the fact bicycles are slow and silent creates extra roadway hazards for motorists.

- Many underage cyclists have never driven a vehicle, or taken a vehicle exam, and therefore do not fully understand the risks and dangers they are accepting by sharing a road with a vehicle.

- Unlike motorists, cyclists are not issued a government driver’s license, license plate, and are not required to have vehicle insurance which can create a big issue if a cyclist causes an accident; flees an accident; or is accused of committing a crime.

- Because cyclists do not have license plates, cyclists who break laws of any kind cannot easily be identified and reported by the public and subsequently tracked down by police.

- Night-time cyclists without visible clothing and lights can be difficult for motorists to see.

- Cyclists are not able to haul more than themselves and whatever they might be able to carry in a basket, etc. When people are in vehicles, they tend to buy more goods because they are not restricted and can easily carry things home (i.e. supporting our local business entrepreneurs and commercial taxpayers).

- Edmonton weather for 6 months of the year is snowy and icy which makes it very dangerous to ride bikes and most cyclists will choose to drive a vehicle during these months. However, bike lanes are still taking up space on the roadways and cannot be used for the benefit of motorists.

- Along bicycle routes, motorists and property owners / renters will suddenly lose the freedom to park either personal or visitor vehicles in front of their property or a property they might visit.

- With the reduced parking freedoms, when a property owner goes to sell their property in the future, they will discover that motorist Buyers will not pay as much for a home or commercial property as they would if that same property continued to offer the same parking freedoms. It could be argued that cyclists might pay more for a property right along a bicycle route however any effect is likely to be minimal since most cyclists are also motorists and it is easy to ride a bike a few blocks to get to the bicycle route. Overall property value impact will be negative, and could easily be in the range of $15,000 to $20,000 or more as the price would need to be reduced until such point that a prospective Buyer is willing to accept the drawback of having a front sidewalk bike lane.

In summary, readers are encouraged to carefully weigh the positives, negatives, and property value implications of the proposed and constructed bicycle lanes before submitting feedback to the City of Edmonton at their website: www.edmonton.ca/cycling/. Community involvement is important to ensure the City of Edmonton is making future plans; responsible decisions within budget; and acting according to the wishes of Edmonton constituents and taxpayers.

Disclaimer: for those readers not currently represented by another licensed REALTOR®, to obtain more information on this topic and / or if you will be selling or buying in the Greater Edmonton Area, call Kelly at 780-414-6100 (pager) or send Kelly an email to SOLD@KellyGrant.ca to schedule a confidential appointment.

This entry was posted on February 6th, 2013 by Kelly Grant | Posted in General

Under The Sun of Italy